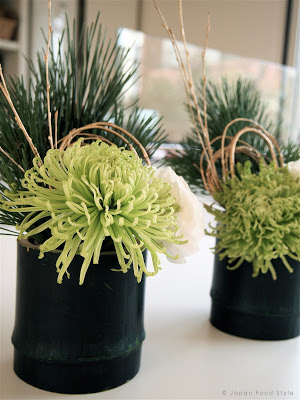 There are several types of New Year’s flower decoration in Japan. We usually decorate bamboo, pine, and other flowers during the New Year period. Pine, bamboo, and plum trees are taken as good luck in Japan.
First one is ‘Kadomatu’. In the traditional way, Kadomatu are made with pine branches and bamboo. We set a big pair of them in front of the house gate during the New Year period.
But I arranged the traditional way. I made small Kadomatu for putting on the table. I put pine, willow, and chrysanthemum in a bamboo vase. 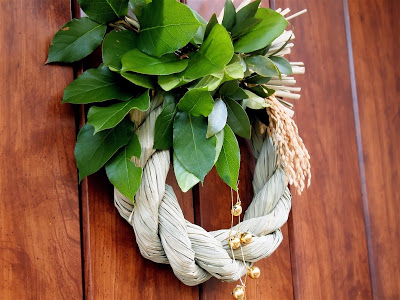 Second one is ‘Shimekazari’ . We decorate it on the door at New Year.
It usually made by good luck charms like bitter orange, ferns, ear of rice plant, and so on. I put green leaves and ear of rice plant to the sacred straw rope. After the New Year’s period, we take the decorations to shrines, and they are burned. 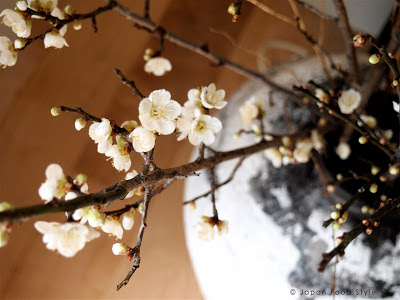 Kagami Mochi is a round rice cake that is decorated  New Year in Japan. One of the traditional Japanese New Year’s decoration. We usually need two round mochi( rice cakes), and small Daidai(Japanese bitter orange). We decorate smaller one on the other large one, and put the Daidai on the top.
In Japan, There is the old belief that the year god visits homes at New Year. But recently, Kagamimochi has been  just one of the New Year’s decoration for almost all the people. The cakes are cut and eaten on Janually 11. It’s an event that called ‘Kagami-biraki’. 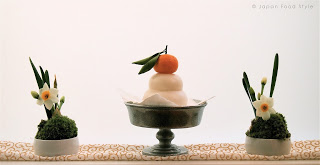