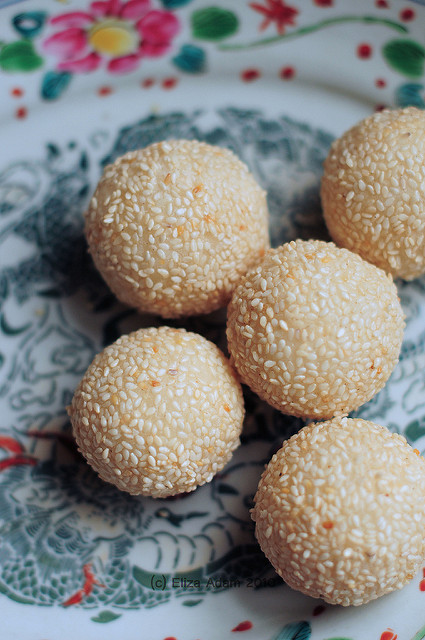 Here Comes finally the recipe for the homemade Asian chinese sesame balls! As we already mentioned previously here, there are many different variants. The balls are not only popular in China, but also in Thailand, Vietnam and Japan, so you do not necessarily need to use mongoose Paste as a filling but also Lotus Paste, sweet coconut rasp or sweet red-bean Paste. There are also many different recipes for dough. This one is a little simplified and also includes potato puree powder. This makes the whole fluffier and crisper! 😉

We tried the recipe again at the weekend and they have become very tasty again, as you can see on the photos 🙂

Preparation of the dough:

All types of flour, baking powder, potato Puree powder (from the supermarket) and sugar in a large bowl and with hands or a spoon mix well. The water gradually, and knead well. The flour should not stick to your fingers and the dough is supple, but still malleable. Depending on how big your tablespoon when measuring, you need more or less water. Therefore, try again and again and do not give all the water in at once! 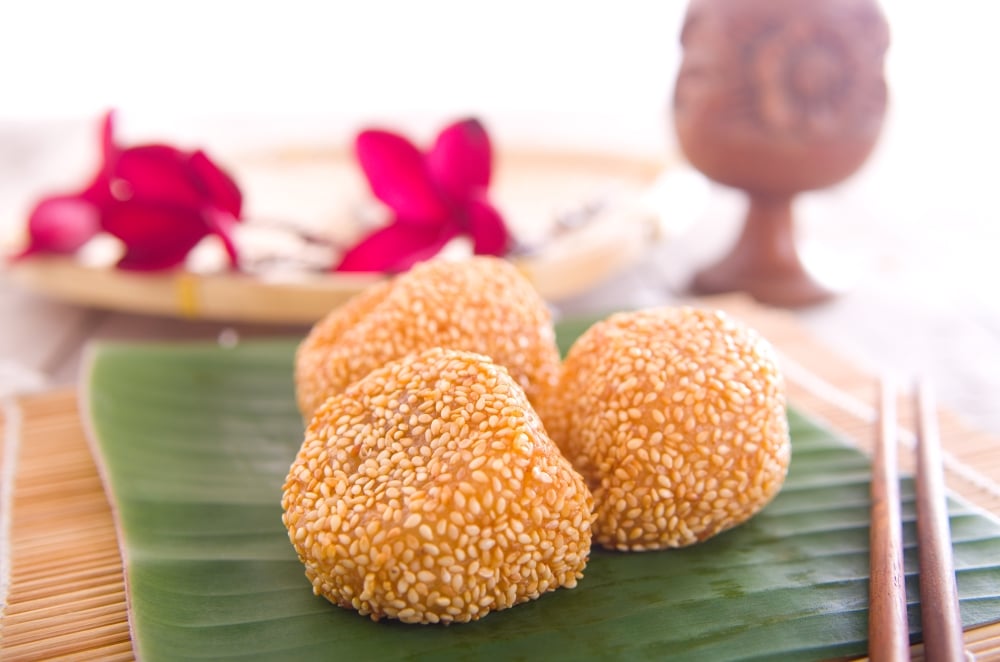 Place the peeled Mongoose in a small pot without a lid and add about 3cm of water over the surface. Heat the pot and cook over high heat. If the water threatens to boil over, immediately reduce the heat and adjust so that the whole will continue to cook without running over. When the water is almost completely evaporated do the lid on it and simmer on the smallest flame about 10 to 15 minutes. Do not stir the beans all the time!

Now add the sugar and put the pot back on the stove. Stir over small heat with a wooden spoon until the sugar has dissolved and everything has become a fine mass. Let the mixture cool down and later form into walnut-sized balls.

Fill the dough: simply form the dough into a circle and wrap the balls on one side in it and close. Add excess dough. Try to get the dough relatively thin, if it is too thick it will not quite. A good guide you can see in the Video below. The ball does not have to be perfectly round. It blows up during frying automatically and is thereby by itself nice round, so do not worry 🙂

Fry the Chinese sesame balls: place the balls in plenty of oil and fry slowly over small to medium heat. If the Oil does not cover the balls you have to rotate the bullets with chopsticks or a fork, by stirred around in the Oil.

When oil covers balls they can swim in and turn themselves (because of ascending bubbles). Fry the balls golden yellow and crispy and drain on kitchen paper. You should not leave the balls in for too long or make the oil too hot, otherwise they could burst in some places and then look a bit unformed!

It is best to eat them fresh when the sesame balls are still warm. Enjoy! 😀

In this Video you can see how the chinese sesame balls are filled and fried. They’re a little smaller than mine, though. But you can do it according to your taste 🙂