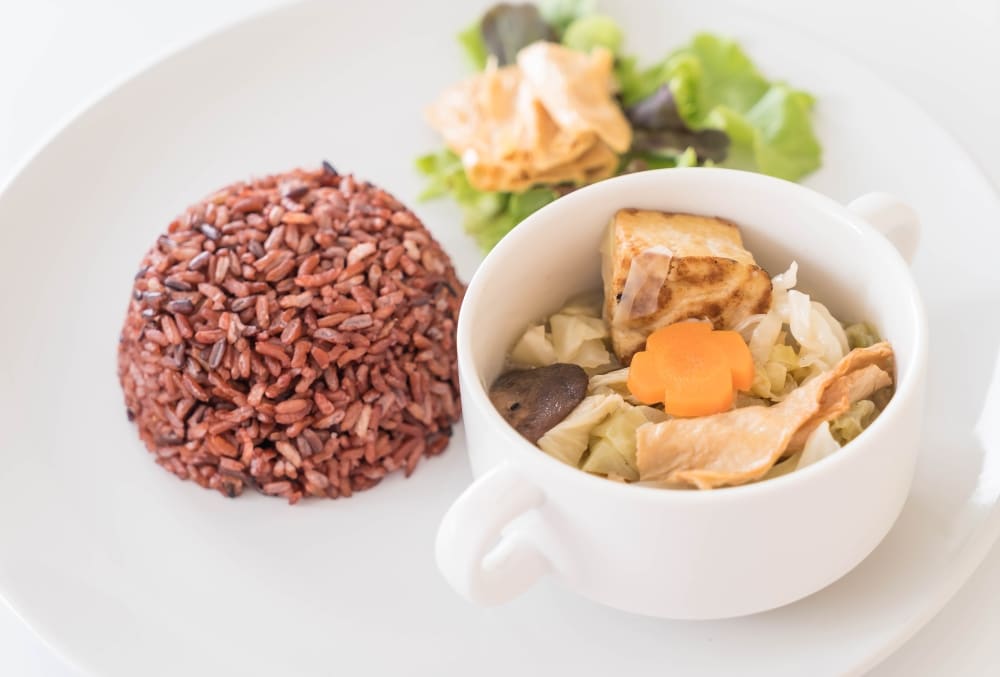 Looking back through my blog’s recipe entries, I think it’s becoming pretty obvious I have a thing for Asian food. It all started when I first started cooking at about age 10. I’d come home from school and head straight for the packaged 10 cent ramen noodles, adding my own fresh vegetables to them, and thinking I was the gourmet shit!

This black rice and tofu dish was a rather whimsical experiment. I’ve had the rice in my pantry for a while, just waiting for the right time and inspiration to fool with it. Chinese black rice, also known as Chinese Forbidden black rice, is a gorgeous short-grain glutenous rice with a sweet flavor and chewy texture. It turns indigo or deep purple in its cooking liquid and smells slightly grape-like. It can be used for both sweet and savory dishes.

This week at the Fresh Market, I zealously grabbed about 5 pounds of some lovely organic roma tomatoes since I’m pretty sure that these opportunities will be few and far between as we near summer’s end. I know I’ve said this before, but those babies are the absolute perfect cooking tomato, uplifting anything they touch with an incredibly sweet and rich tomatoey dimension. There is nothing else quite like it. Although many people don’t think of using tomatoes in Asian cooking, it is actually quite common in Szechuan cuisine and throughout Southern China, and Malaysia. Tomatoes and five-spice? Hmmmmm….

When it comes to five-spice powder (typically a blend of fennel, star anise, cinnamon, cloves, and white pepper), it’s not on my top 10 list of turn-to Asian spices or condiments. As a matter of fact, any that I’ve bought in the past would just go to waste since I’d use it only once and the whole bottle would end up being shoved to the back of my spice drawer left to go stale. Well, I got a five-spice itch and imagined searing some tofu that had been coated with it, and somehow incorporating those amazing tomatoes.

So as it came together: I took a few romas, quarted them, and marinated them in equal parts of hoisin and Chinese chili sauce, minced garlic, and grated ginger. I let them sit and smolder in all those wonderful flavors for about 30 minutes.

Some dehydrated shitake mushroom caps were reconstituted in hot water and then cut into quarters.

I cut extra-firm organic tofu into 1 1/2 inch filets, placed them between kitchen towels, and squeezed for about 30 minutes with the weight of a cast iron skillet placed on top to remove all excess water. I then sprinkled them with shoyu, followed by a liberal coating of five-spice powder, seared them in a wok with grapeseed oil, and removed them to cool before being cut into triangles.

To prepare the rice, I sauteed a cup with olive oil, a dash of shoyu, and minced garlic in the bottom of a Le Creuset pot (I had to mention Le Creuset, I am so proud of my collection!) then simmered it with vegetable broth for about 35 minutes. Once finished, I added some diced green onions.

Finally, in a hot wok with the same grapeseed oil used to sear the tofu, I added the tomatoes and their marinade, plus the quartered shitake caps, and stir fried just until the tomatoes began to soften and release their juices. I added the tofu back in and gave it a quick stir to bring all flavors together.

After plating the rice and tomatoes, I garnished with some chopped cilantro.

The verdict? This is one of my most successful experiments. Five-spice powder will no longer go to waste! It went perfectly with the richness of the tomatoes, the meatiness of the tofu’s texture, and chewy shitakes. The hoisin-chili marinade was both sweet and spicy, but not too stingy-spicy, just a nice warmth throughout my mouth. Hoisin sauce and romas really love each other! The black rice was just an added interesting and exotic dimension. YUM!