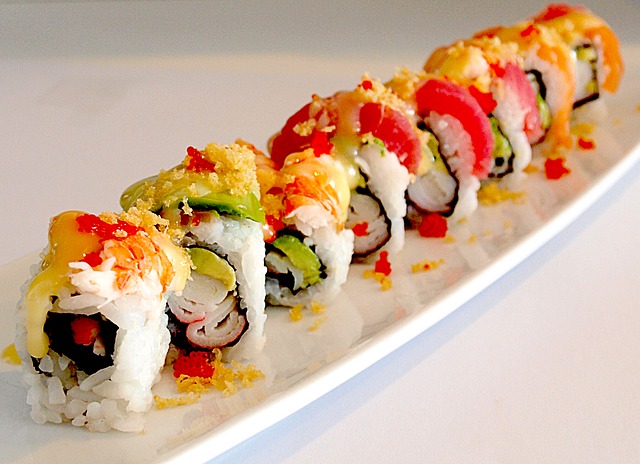 Today, we will prepard 3 different Ume shiso maki rolls and create the “rice” using method of processing jicama and pine nuts until rice-like, but in different proportions. You can seasone the mixture with sea salt and then dehydrated it to remove excess moisture.

These spicy-faux tuna Shiso maki rolls taste uncannily like the real deal. Fleshy, lower-moisture Roma (plum) tomatoes were ideal for the task. You slice them vertically and scoope out the seeds and inner membranes, then dice them into a bowl.

You then add sea salt, dulse flakes, and olive oil, tossed well, and put them into the dehydrator for about 2 hours to remove any excess juiciness. Finally, you toss them once again with chili paste, sesame oil, and chopped scallions.

We love the chewy texture of rehydrated shitake mushrooms. For this maki, you can use a combination of both fresh and rehydrated mushrooms that were both marinated in nama shoyu, and agave, then sprinkled with a little truffle salt. You roll them up with sesame seeds and some lovely chive flowers.

Umeboshi plums are a pickled variety of Japanese plum known as “the king of alkaline foods” in the macrobiotic diet. They are magnificent for digestion and even taken as a hangover aid. They have a distinctive and powerful tart-salty flavor, incomparable to any other food. Umeboshi plums are available whole, in a paste form, or as vinegar. For these rolls, the paste is used.

What is shiso anyway? 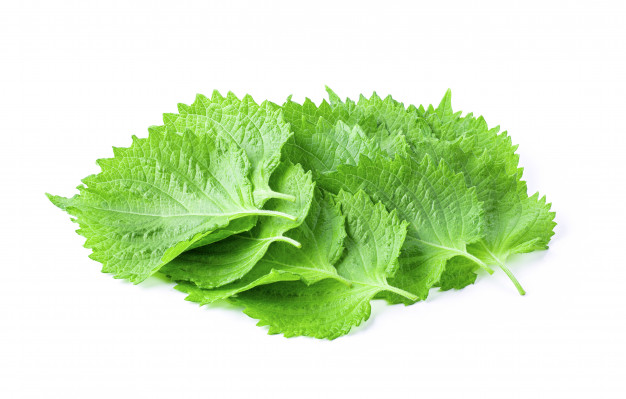 Shiso is the Japanese name for this plant. This name is also widely used in other countries. Other names used are Japanese basil, Japanese nettle or nut Herb. In places with a mild climate, the plant resets itself. There are green and purple varieties (the” Purple Coin”), which are considered to be two different botanical species. The leaves are similar to those of the nettle, but are slightly more rounded in shape. The essential oils give a strong taste with the same intensity as that of mint or fennel. The plant contains a multitude of minerals and vitamins, has anti-inflammatory properties and allegedly helps to preserve and sterilize food.

Perilla frutescens is a plant that is particularly present in East Asia, especially China, Japan and Korea. Meanwhile, it’s also has recently spread out all over the world. In the early 19th century, it was taken by Asian immigrants, so now shiso is frequently found in the south-east of the United States and parts of Canada. By its easy adaptation the plant easily suppresses other plants in the surounding flora. In Europe, a few local companies specialize in growing them for delivery to restaurants.

In Vietnamese cuisine, a variety similar to the Japanese hoshiso but with bronze-green top and purple on the opposite side is used. The leaves are narrower and have a stronger smell than hojiso. In Vietnam, this is called tía tô, derived from the characters (紫蘇), whose standard pronunciation in Vietnamese tử tô. This variety is usually eaten as a garnish in rice creams called bún, and a number of different casserole dishes.

In Nepal and parts of India, shiso silam is used. The seeds are ground with chili and tomatoes to make a tasty dip.

Chemistry of the shiso plant

The essential oils extracted from shiso leaves by steam distillation consist of a series of chemical compounds which may vary according to the species. The main ingredient, 50-60% of the oil, is perillaldehyde and is the substance that determines the aroma and taste of shiso. Other terpenes such as limonene, beta-caryophyllene and farnesene are common too.

Perilla ketone is toxic to certain animals. When cattle and horses eat purple mint (of the PK-chemotype) during grazing, this causes pulmonary oedema, leading to toxicosis.

Shiso oil or Perilla  oil is obtained by pressing the seeds containing 35 to 40% oil. In parts of Asia, shiso oil is used as an edible oil that is more appreciated for its medicinal effect than for its taste. The oil is rich in omega 3-fatty acid alpha-linolenic acid.

Like linseed oil, shiso oil is suitable as oil in paints, varnishes, linoleum, printing ink, lacquers, and as water-repellent coating on clothing. It can also serve as fuel. The oxime of perillaldehyde (perillartin or perilla sugar) is used as an artificial sweetener in Japan, as it is 2000 times sweeter than sucrose.

Shiso leaves are sometimes referred to as “Japanese basil” but are actually from the beefsteak plant family. It tastes nothing like basil, and like ume plums, has an incomparable flavor to any other herb.

Shiso and umeboshi plums are a perfect, harmonious match, which is why you will commonly find shiso leaves included in a package of ume plums. Cucumbers are the perfect balancing and cooling compliment to the ume plum’s and shiso’s sharp flavors in these maki rolls.

What is Makizushi? The category in which Shiso Maki Sushi (rolls) fall

Makizushi (巻き寿司) is obtained by taking a leaf of dried seaweed (nori) by spreading on it a layer of rice and on top of everything Fish and vegetables. Then just roll the set (using a makisu (巻き簾?bamboo stems connected together by a cotton string) and “stick” the seaweed leaf by moistening it. The roll is then cut into slices. Depending on the size, there are several diameters to designate these sushi rolls:

The ura-maki zushi is a Californian variety with a layer of rice over the nori leaf.

Among the most common varieties, we can mention the Kappa maki かっぱ巻 or ConCom with cucumber, the oshinko Maki お新香巻 with daikon (pickled radish) or the California rolls, western variant.

Some lesser-known maki sushi varieties are quite easily found in restaurants and asian shops. These include:

Temakizushi (手巻き寿司, literally “hand-rolled sushi”) is a roll formed from a dried seaweed leaf filled with rice and other ingredients (fish, vegetables, etc.). You eat temakizushi by hand. Their ease of preparation has made it quite a popular variety that is often prepared at home too.

Chirashizushi is a set of toppings (neta) served on a layer of vinegared rice (shari). Hearty, it can be eaten as a complete dish, and comes close to the notion of Japanese donburi (a bowl of rice on which various fillings are arranged and constituting a complete dish).

The ingredients used often depend on the region where it is produced; it is traditional to serve it during Hinamatsuri (雛祭り?, literally meaning “doll’s day” ) a holiday that takes place in Japan on March 3, the day dedicated mainly to little girls.

Inarizushi (稲荷寿司?) is a pouch or pocket of aburaage (fried tofu) that is filled with vinegared rice. Its name comes from the Shinto God Inari, who is believed to have a soft spot for fried tofu. If the pocket is mostly made of tofu, there are regional variations based on fukusa-Zushi fine omelet (帛紗寿司?), or chakin-zushi (茶巾寿司?). It should not be confused with Inari maki, which is a maki stuffed with fried tofu.

Oshizushi (literally “sushi” pressed into a mold and then cut into squares) is usually made up of two layers of rice between which the ingredients are laid out (fish, vegetables, nori.) and is topped with another ingredients. The whole thing is pressed into a rectangular mold whose top and bottom are removable. Oshizushi is also eaten by hand. It is the oldest form of sushi that can still be tasted in many regions of Japan. It’s easy to make and has many local variations, but remains difficult to enjoy outside of Japan. The battera (バッテラ?) or saba zushi (鯖寿司?) mackerel, is its most popular version.

Sasazushi, is a type of oshizushi.

Sushi is available in many forms and versions in Japan; most of these kinds of sushi are specialties of the local areas from which they originate, so it is difficult to obtain them elsewhere. Examples include tekone-zushi from Mie Prefecture based on marinated fish, Osaka zushi (square-shaped sushi, called hako Zushi, ” box sushi “) from Osaka, funa Zushi, an ancient style of sushi from Shiga Prefecture, sake-Zushi a type of sushi whose rice is flavored with sake rather than vinegared rice, served topped with shrimp, sea bream, sea bass, octopus, shiitake, bamboo shoots and Kyūshū omelet or masuzushi, which is made of steamed Trout wrapped in bamboo leaves, arranged on arranged on a bed of rice ( usually made in Toyama Prefecture).

Sushi from made from Green shiso leaf and sea urchin

Shiso is an aromatic plant that comes from Japan. It is also used to macerate the famouse plums.

Using rice vinegar instead of wine vinegar is essential, because the latter has a different taste and, in addition, “steals” aroma some other ingredients.

Brown rice is a nutritious and healthy alternative to white rice, it’s loaded with vitamins and minerals and that according to the Orientals centers and balances the mind. So, you can safely include it in your sushi recipe.

To make the sushi rice:

Cut the rolls into slices 2 cm wide.
Season each piece with oil and tamari, with a dropper.

You can spice up the maki sushi pieces with jellied saffron (saffron jelly), dried parsley powder and a leaf of green shiso leaf.

If you enjoy making sushi st hone you will definitely enjoy and have fun preparing these Ume shiso maki rolls at home.

[…] Each sea urchin contains 5 of these small pieces or orange buds. You can make delicious’ maki sushi ‘ with […]

[…] love sushi, so I sometimes make a variety of sushi, like maki-sushi, chirashi-sushi, hand- roll sushi, nigiri-sushi and the other sushi at home. When we enjoy sushi at home, we need perfect sushi […]