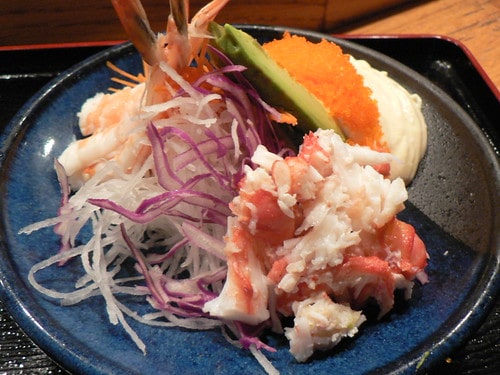 Aemono – Vegetables or meats mixed with a dressing or sauce.

Agemono – Fried foods. May be deep-fat fried or pan-fried.

Aji – Horse mackerel. This fish is not actually a mackerel, but member of the Jack family. It is small, about 6″ in length, and often served filleted and marinated in vinegar.

Akagai – Pepitona clam. These are the red ones.

Ayu – Sweetfish. A member of the trout family from Japan. Served grilled.

Beni shoga – Red pickled ginger. Used for inari-zushi, futomaki, and chirashizushi, but not for Nigiri-zushi.

Buri Toro – Fatty Yellowtail. The belly strip of the yellowtail.

California Roll – A California roll is an inside out (rice on the outside) maki created in California. It usually consists of kamaboko (imitation crab meat), avocado and cucumber.

Chirashi-zushi – A bowl or box of sushi rice topped with a variety of sashimi. Means “scattered sushi”.

Chutoro – The belly area of the tuna along the side of the fish between the Akami and the Otoro. More fatty than Akami, not as fatty as Otoro.

Donburi – A large noodle bowl. Also refers specifically to a rice dish served in such a bowl with with the main items placed on top of the rice.

Fugu – Puffer fish. This fish is a delicacy that contains extremely poisonous tetrodotoxin. In Japan, only licensed fugu chefs are allowed to prepare fugu.

Gari – Pickled ginger that comes with your Sushi.

Gunkan-maki – Battleship roll. This is where the maki is wrapped in a strip of nori to form a platform for the liquid or soft neta. Used for oysters, uni, ikura, tobiko, etc…

Gyoza – A filled wanton dumpling that has been either fried or boiled. Shumai (another type) is always steamed.

Hirame – This name is used for many types of flat fish, like fluke or flounder. Some restaurants call halibut “hirame,” however the actual Japanese word for halibut is “ohyo”.

Hikari-mono – A comprehensive term for all the shiny fish like Aji, Iwashi, Sanma, Kohada.

Himo – The fringe around the outer part of any clam. (The clam beard!)

Kajiki – Billfish including Swordfish and Marlins. Swordfish specifically is called Me-Kajiki or Kajiki-Maguro.

Kani – Crab meat. This is not the same as kamiboko. This is real crab meat.

Katsuobushi – Bonito flakes. Smoked and dried blocks of skipjack tuna that are shaved and uses usually to make dashi.

Kohada – Japanese shad. Kohada is the name when marinated and used as sushi neta. Prior to this the fish is called Konoshiro.

Maguro – General term for tuna. Specific cuts have their own name.

Akami – the leaner flesh from the sides of the fish. If you ask for ‘maguro’ at a sushi bar you will get this cut.

Chutoro – The belly area of the tuna along the side of the fish between the Akami and the Otoro. Not as fatty as Otoro.

Otoro – The fattiest portion of the tuna, found on the belly of the fish.

[Toro is the generic term for the fatty part of the tuna (chutoro or otoro).]

Makisu – Mat made of bamboo strips used to make sushi.

Maki-zushi – The rice and seaweed rolls with fish and/or vegetables. Most maki places the nori on the outside, but “inside out” rolls place the rice on the outside.

Neta – The piece of fish that is placed on top of the sushi rice for nigiri.

Nigiri-zushi – The little fingers of rice topped with wasabi and a filet of raw or cooked fish or shellfish. Generally the most common form of sushi you will see outside of Japan..

Oshibori – The wet towel one cleans one’s hands with before the meal. Not meant to be used on the face and neck!

Ono – Wahoo. Also the Hawaiian word for “delicious,” because it is.

Oshibako – Used for pressing the sushi to make Oshi-zushi.

Oshi-zushi – Sushi made from rice pressed in a box or mold.

Ponzu – Sauce made with soy sauce, dashi and Japanese citron.

Ramen – ‘Instant’ noodles. Traditional Japanese “fast food,” ramen was invented in the 1960s and is now found worldwide. It has been said that without ramen, many American college students would starve to death each year.

Sazae – Type of conch, not found in the US.

Shiokara – A dish made of the pickled and salted internal organs of various sea creatures. It comes in many form such as ‘Ika no Shiokara’ (squid shiokara), shrimp, or fish.

Shirataki – A type of translucent noodles.

Shiromi – This is the general term for any white fish.

Shiso – The leaf of the Perilla plant. Used frequently with in makizushi and with sashimi. The sushi term is actually Ooba.

Shitake – A type of Japanese mushroom.

Surimi – Imitation crab meat (also called kamaboko) usually made from pollack. Often used in California rolls and other maki, it is not the same thing as “soft shell crab.”

Sushi – Technically refers to the sweetened, seasoned rice. It is modified in Japanese to zushi when coupled with modifiers that describe the sushi style. For example, “nigiri-zushi.” Generally, however, when someone says “sushi,” they are referring to the broader category of food, not just the flavored rice.

Tai – Usually refers to porgy or red snapper. Real Japanese tai is very hard to find in the US.

Tamago yaki – Egg omelet. Sweet and light. In Japan it is the trademark dish of each chef.

Tataki – Tataki is a Japanese term which may mean seared on the outside only (as in Katsuo) or chopped up and served in its raw form (as in Aji).

Tempura – Seafood or vegetables dipped in batter and deep fried.

Udon – Wide noodles made from wheat.

Unagi – Eel (Freshwater) – grilled, and brushed with a teriyaki-like sauce, it is richer than salt water eel (Anago).

Wasabi – Japanese horseradish. Unfortunately, the wasabi most often served in sushi bars is not real wasabi, but powdered and reconstituted American Horseradish with green food coloring. Real wasabi is difficult to find in most restaurants due to cost.

Yakumi – A generic term for condiments.

Domo arigato – Thank you very much

Konichiwa – A greeting, roughly `how are you’

How to Choose and Cook Japanese Rice 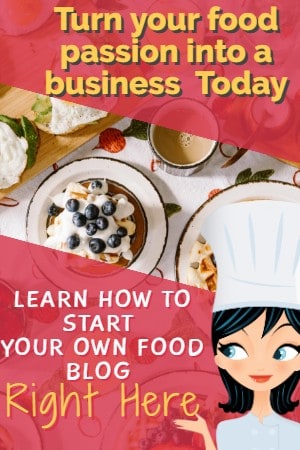